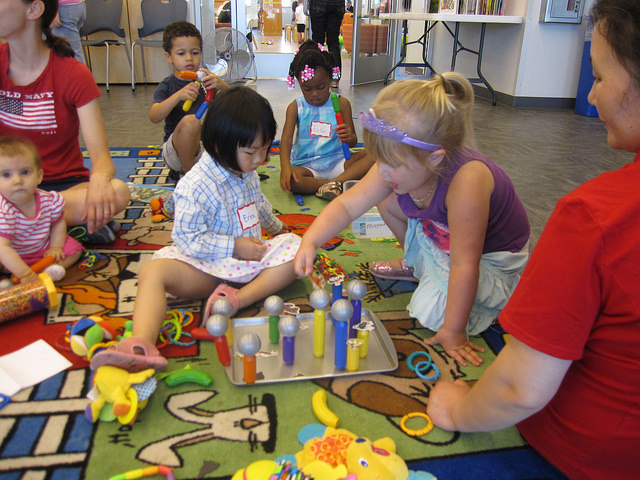 Watch a child at play and you soon come to realize that their imagination is boundless. It isn’t until eight or nine years of age that reality starts to replace imaginative play, and belief in fictional characters starts to wan.

Research has proven that a young child who has limited television time every day, but also has a parent that reads and interacts with them every day will experience much greater brain development than a child who is placed on the couch in front of the TV every day. I have personal experience with both types of parenting; one set of parents would not allow their toddler to watch TV, but would play games and read to them throughout the day while the other set of parents used their TV as a babysitter. The difference in the children was remarkable; the toddler who was interacted with throughout the day was much more confident, verbal, and engaged in imaginative play. The child who watched TV every day was withdrawn, non-communicative, and did not seem to use her imagination for play at all.

Not only is play time good for the child, it can also be good for the adult caregiver as play helps to relieve stress at all ages. It’s very fun to teach a child how to use their imagination; make up stories together and act them out, use items from around the house to engage in play such as blankets to make a fort, or large boxes to create a tunnel. Cut out round, rock shaped pieces of paper and pretend they are rocks to leap across an imaginary river. Inexpensive lights can attach to ball caps for pretend explorations into the jungle where tigers (the family cat) and piranhas (the pet goldfish) live. Use items from around the house to create musical instruments and pretend to play each one, showing the child how each instrument works. Exposing music to a child from an early age will help them to develop a love of the arts that could follow them a lifetime as they decide what they want to be when they grow up. The child may decide to become a DJ or work in the music industry.

The child’s playtime is literally only limited by your imagination and once the little ones catch on to the game they won’t need your imagination as help at all. Providing a child with positive interactions throughout each day will encourage the brain synaptic connections to flow and become stronger each and every minute.