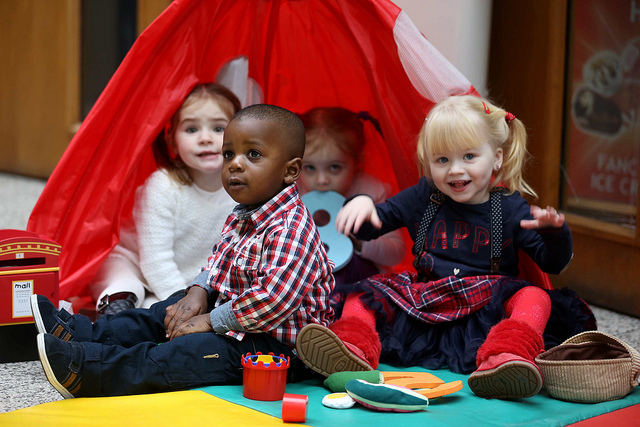 Even before they are born an infant’s brain is developing learning patterns; for up to a year after an infant comes into the world they will continue to remember and actually prefer the songs that were sung to them while they were still in the womb.

The first five years of life are extremely important to a developing child. They are not only learning new things every day, but their brain is learning how to learn. The brain of an infant will produce over 2 million synaptic connections every second. By the time the infant enters toddler stage they will have over 100 trillion synapses, which begin to decline and disappear as they go through middle school.

Infants are born with a preference for people; they prefer listening to a human voice talking to them or singing over listening to recordings, and they seem to know the difference. Learning language skills should start as soon as the baby is present, and can begin with adults singing and talking to them. Talking and interacting with an infant will help them to gradually understand language and encourage them to join in the conversation, even if you can’t understand exactly what they are saying.  Helping an infant to understand language and vocabulary is also helping them to become social beings.

Music should be a large part of the learning experience; research has proven that children who study and play musical instruments have a greater understanding of language than their non-musical friends. Music and language are developed in the same area of the brain, so the findings are not surprising. Children with no prior musical training who studied music for a few weeks were found to have improved language skills and improved memory functions. Children who study music will produce better tests scores and even have larger IQ’s.

Music also encourages a child to use their imagination, which is another positive learning experience. Children who engage in imaginative play learn how things work in the real world and also learn how to solve problems as they work through them in imagination-land. Talking to one or many imaginary friends engages their language skills and their critical thinking skills. Music has shown to be particularly helpful with children experiencing learning difficulties by strengthening their auditory skills.

Music can also be a gateway for the future; those who study music may chose to continue that study through their life and make a career from it. A child could chose to play a musical instrument or sing, but that’s not all. An individual who has a knack for rhyming may become a lyricist, while one who is interested in computers might learn about sound mixing. Someone who enjoys working with people could use a degree in music to become a music therapist.

From the time an infant is born giving them positive exposure to spoken words and music will help to encourage their language and speech development, which in turn enables them to become well-rounded, sociable human beings.

How To Encourage Language Development In Your Child Credit Picture License: Department of Children and Youth Affairs via photopin cc